87% of House Republicans sell out American workers, American factories, and American sovereignty in their Oath-of-Office breaking 'Yes' vote for CAFTA

CAFTA passed the US Senate by a 54-45 vote on June 30, 2005. TheUS House passed CAFTA by a vote of 217 to 215 on July 28. If even one more House Republican had kept his (or her) Oath of Office and had voted against CAFTA instead of voting for this anti-American legislation, then the vote would have been a tie (216 to 216), and CAFTA would have failed.

Literally in the middle-of-the-night, 202 traitorous, quisling, Republican Congress-critters, of the 231 in the US House, sold-out America during a floor vote at 12 midnight; after intense, personal pressure tactics by the Illuminati Establishment's White House front man, Skull and Bones masonic secret society member, President George W. Bush.

CAFTA, a stepping-stone to the FTAA, which is itself a stepping-stone to a Western Hemispheric regional government, like the NWO's European Union, is vitally important to George W. Bush's Illuminati Establishment New World Order masters... hence the reason for his intense, personal lobbying of individual Congressmen, even amidst the ongoing agenda items of the Rove scandal and the Roberts nomination. 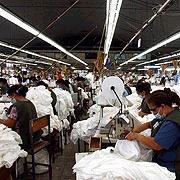 Central American goods, like these shirts made by Honduran workers, could be imported without most tariffs if CAFTA passes.

Ending a contentious debate, it voted 217 to 215 in favor of the deal, which lowers trade barriers between the U.S. and six Central American nations.

The deal marked a come-from-behind win for Bush, who traveled to Capitol Hill earlier in the day in a last-ditch bid to secure needed votes. Amid a wartime backdrop, Bush rallied Republicans by stressing trade's role in cementing democracy and stability in the USA's neighborhood.

"The president reminded us that we come here not only to represent our district but to represent the nation," said House Majority Leader Tom DeLay, R-Texas.

The Senate approved CAFTA last month. But the deal, which would weld the USA and the Central American nations ­ Costa Rica, El Salvador, Guatemala, Honduras, Nicaragua and the Dominican Republic ­ into a seamless trade bloc, hit rougher sailing in the House.

Some Republicans from sugar-producing and textile states, such as Florida and North Carolina respectively, opposed the bill, as did Democrats concerned about worker rights and eager to deal the president a setback. CAFTA also became a lightning rod for other worries, including the ballooning U.S. trade deficit and growing competition from China.

To attract votes from lawmakers worried about China, the Republican-led House passed a separate measure Wednesday that would allow new tariffs on Chinese goods.

Labor union officials say CAFTA will depress U.S. paychecks because it lacks adequate protections for Central American workers. Since the 1994 NAFTA trade deal with Canada and Mexico, 890,660 U.S. textile and apparel jobs have vanished, according to the National Textile Association.

"The opponents of trade are playing hardball," complained John Murphy of the U.S. Chamber of Commerce. The political fuss dwarfs the deal's projected economic punch. U.S. exports to the CAFTA nations total $15 billion, less than 1% of U.S. output.

[Steve Lefemine: what a deception this last statement is - 3,000,000 American manufacturing jobs have disappeared in the last 5 years. As stated above,890,660 U.S. textile and apparel jobs have vanished since the NAFTA deal. CAFTA will intentionally continue the exodus of American manufacturing jobs and factories. Those who voted for CAFTA have committed economic treason.]

First NAFTA, then CAFTA, then FTAA, then Western Hemispheric regional government, then one-world socialism/global government,i.e., the New World Order (as written on the back of the $ 1 dollar bill in your wallet as Novus Ordo Seclorum at the base of the pyramid on the reverse side of the Great Seal of the United States).

This can, by the grace of God, all be stopped, just as God put an end to the ancient Tower of Babel in Genesis, chapter 11.

On July 28, 2005, Americans lost another layer of our country's sovereignty when 202 traitor-Republicans voted for the agenda of the New World Order (regional government, then one-world government). However, now the battle shifts to the Western Hemispheric "Free Trade Area of the Americas" (FTAA), involving all of the nations in North America, Central America, and South America (except Cuba).

Any of the 217 U.S. House members (202 Republicans and 15 Democrats) who voted for CAFTA (HR 3045), this NWO, anti-American, unconstitutional transfer of Congressional authority to international tribunals and bureaucrats, and erosion of U.S. independence and sovereignty, has broken his (or her) Oath of Office, and should rightly now be impeached. Likewise, the same for any and all of the 54 members of the U.S. Senate who traitorously voted for CAFTA (S 1307) on June 30, 2005.

[ see CAFTA votes of both Senate and House at http://thomas.loc.gov/ ]

Certainly, any such oath-breaking incumbents should NOT be re-elected next year on November 7, 2006 !